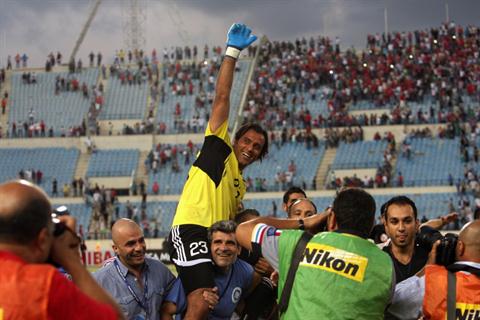 Hassan is raised in celebration of Lebanon’s win over Iran. (Image Courtesy of the Daily Star).

If we’re to believe Fifa.com, Lebanon faces an uphill battle in Qatar on 14 November in their next outing, with victory potentially lift them into the section’s top two. I think everyone remembers the day we made it to the fourth round for the first time in our history last year. I also see that it’s noteworthy to highlight how the Lebanese react to Football in Lebanon and how – in a way or another – we react to politics the same way we react to sports.

Opportunist Media. Felix Baumgartner, the Fassouh Building and the Ashrafieh Explosion are only examples of times when the Lebanese Television Channels can boost their popularity. Last year they found in the Korean-Lebanese Match (That ended 2-1 in the favor of Lebanon) the perfect event to show that they support the National team. The “Mabrouk Lebnen” 5 min-advertisement for the following few days is a perfect investment of the human market that had just emerged: Lebanese National team fans.

Arriviste Politicians. Your public image as a politician is what matters in this country. Practically no one cares if you make good laws or fight corruption. For a politician to succeed, he has to make the right speech at the right time. And if it’s not the Martyr’s Square or the Ashrafieh Explosion Site, it can be Camille Chamoun Stadium. A Lebanese win is after all the perfect moment for them to talk about patriotism or to act patriotic (By attending the game), and the Lebanese Football Fans eventually represent the biggest electoral base in Lebanon.

Never Satisfied And Always Nagging. The Lebanese are annoying. They tell you that they aren’t pleased with our tie with Uzbekistan and with our loss to Qatar or to Australia. Somehow they forget that we’re Lebanon, and that’s the first time we’ve  ever made it to that round, and that our players are doing their best to win, that they’re underpaid and that they were ignored by the media and the Lebanese for nearly two decades. “We did this we did that we’re gonna win we’re gonna lose they should play like this they shouldn’t play like that“. It’s the same with politics, they keep nagging that the MPs don’t work and that all the parties are plotting against the country, and they don’t even try to change them.  If they’re not satisfied with the players’ performances and think they can do better they can always go for the try outs. Or they can simply pressure the government so that the Sports ministry gets a bit more funded. Oh, sorry, I forgot that we don’t have state budgets in Lebanon since 2005. Maybe they can do a demonstration so that we finally have one. But that’s too mainstream, they prefer to nag, it’s easier.

The Sudden Interest And The Subsequent Alzheimer. And this happens every time and nearly with everything. Do you remember the  Fassouh building victims, the ethiopian airplane crash, the false witnesses issue that brought down Hariri’s government, the law that was supposed to separate between governmental and parliamentary members? There’s always a sudden interest in a specific matter that is soon forgotten in the few following weeks. Everyone watched our match with Korea – Camille Chamoun’s stadium was full – but the same stadium was relatively empty in our match with Iran – That we won – and that most of the people didn’t  know about. And why didn’t we hear of that game before? Because we had already lost two games in the fourth round, so backing our team – that the media and subsequently the population chose to ignore – suddenly became a tabout.

Abandon The Locals And Seek Foreign Shelter. Who cares about the Lebanese industry? Who cares about the Lebanese agriculture? Who cares if they’re in a bad shape? What’s important is to keep importing goods from the outside and ignore the local companies. We don’t try to improve our economy by ourselves, or to solve political issues by ourselves. We always seek foreign shelter, foreign goods, a Doha agreement, a Taef agreement, Lausanne talks. We always destroy what we have, because backing national things is too mainstream. I can bet that at least half of the Lebanese that know every detail of AC Milan Or Chelsea don’t have a clue that Mohamad Haidar exists, or that his team, Al Safa – The Lebanese premier league 2012 winner – exists either.

Blame The Wrong Persons and Ignore The Problems. It’s easy to blame Theo Bucker, or Abbas Hassan. Everyone makes mistakes. Most of the Sports federations and teams are corruption hubs, religiously shattered, politicised, unfunded and forgotten. At least these guys made it that far. You want to criticise them? start by giving them – or ask the government to give them – proper wages, proper technical assistance. Start by asking for a reform, for a solution of the corruption. The least one can do – if he wishes to criticise – is to support and encourage the team. It’s exactly like blaming Bassil, Siniora, Hariri, Aoun, Geagea, Berri (and many others) for the corruption while you’re putting the same names on the ballot every four years.

And the next game with Qatar won’t be different. Just sit back and watch the reactions. Oh and Watch the game, too.