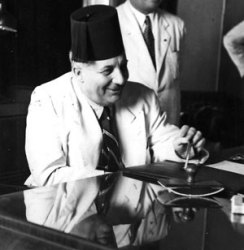 A couple of days ago, I came across El Solh’s ministerial statement of the 7th of November 1943. His speech, considered to be more or less a written sample of the National Pact, doesn’t look as if it comes from the 1940s. You can see it [here] (I couldn’t find an english version).

But what needs to be carefully underlined in the speech and in the National Pact is the self-distancing policy that Lebanon has practiced since its independence: The “no west, no east formula”. When Chamoun allied himself with the Americans and his opponents with the Arabs in 1958, Lebanon was a victim of a civil war. 17 years later, when Lebanon wasn’t able to isolate itself anymore from the regional interference, it was time for another civil war. The self-distancing policy was the foundation-stone of the Lebanese republic. Whenever this cornerstone was destroyed, Lebanon had to be demolished with it. The events of 1958 and 1975 tell us that regional context led to the destruction of that cornerstone. But the dissociation policy isn’t only about isolating Lebanon from foreign and regional politics. It’s also about maintaining a local status-quo, a political consensus. That’s why we still don’t have a proper electoral law. That’s why decentralisation is still in the process. That’s why the Lebanese are still asking for the same things since 1943.

Because deep down, self-distancing policies aren’t only diplomatic ones. They’re also local ones. Take the example of Mikati’s government. It can’t take a biased diplomatic stand, and it can’t also elaborate an electoral law or a state budget. Because if an electoral law passes, the status-quo would end and series of political (and military) confrontations might follow. We saw this happen in 2008 in the 7th of March incidents and in 2011 when Mikati was appointed Prime Minister. Maybe the clashes were minor, but they’re an indicator of what might happen if a major decision, such as a unilateral change of the electoral law might lead to. If the parliament happens to pass an electoral  law that lowers Future Movement’s representation, Mikati knows exactly what he is going to face: The events following Wissam Al-Hassan’s assassination were only an appetizer. While new laws and decrees can keep or end the status-quo, the absence of any new law or decree won’t harm the equilibrium. That can only explain why on the long-term, the Lebanese political system didn’t evolve. Most of our laws go back to the days of the French Mandate. It’s because keeping a law that’s agreed upon is a lot more easier than elaborating a more modern version that can bring one of the political factions in Lebanon down.

By the time I’m writing this, Lebanese fighters are dying in Syria for the sake of a regime or its opposition. The dissociation policy is facing a serious test, and so is the consensual democracy with M14’s Boycott and M8’s hold to power. As a matter of fact, self-distancing policies and consensual democracy are one package. They’re two manifestations of Riad El Solh’s formula. Either you take them all and get a weak – but relatively stable – state, or you get rid of them and get a civil war.