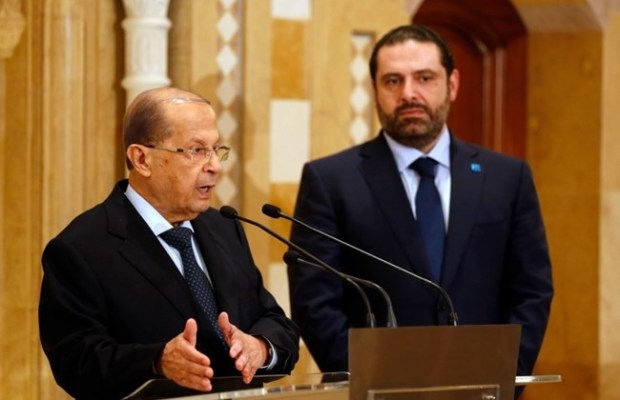 “Based on agreements, I announce my support for the candidacy of Gen. Michel Aoun,” Hariri declared to loud applause.

“Aoun will be a president for all Lebanese,” he added. “This is not a settlement, this is a sacrifice.”

Yes. On October 20, 2016, Saad Hariri officially endorsed Michel Aoun as his presidential candidate, abandoning his previous endorsement of Sleiman Frangieh, and changing the rules of the Lebanese political game.

A little bit of context

When Berri gave hints, right after his agreement with Bassil on the oil dossier two months ago, that he was willing to accept a Aoun presidency as part of a bigger deal (He called it “السلة المتكاملة”, which literally means “the complete basket”), he indirectly suggested  a possible deal that also included a  Hariri premiership and a consensual electoral law (package deal confirmed by Nasrallah’s speech in August, that also included Berri as speaker). Berri’s “blessing” meant two things:

Berri (and all of us) probably  thought that Hariri would try to block the Aoun presidency for some time, and then eventually come back with a package deal that probably doesn’t have a Aoun presidency in it but instead other electoral law benefits to the entire M8 alliance, hence ending the presidential crisis by weakening the FPM within March 8 but reinforcing March 8 on the national level.

If theoretically Hariri would be made prime-minister, he would leave at the first parliamentary elections, 9 months from now, with no guarantees of having him back in power after the elections. Aoun, on the other hand, would have been elected for 6 years, and a deal that simply tries to exchange a 9 month-term premiership with a 6 year term presidency, without a clear plan about an electoral law or a parliamentary elections would be unwise for Hariri (the potential prime minister).

To sum things up, Hariri was supposed to say no to a Aoun presidency, at least with no clear road-map with what was going to happen with the governmental formation (what would the governmental shares be in the government? 15-10-5 like 2010? 8-8-8 like 2013? Who are the centrists anyway?) and the electoral law. There were too much unknown variables to have a presidency deal, and Berri’s maneuver was his way of reducing the FPM/LF pressure on Amal (the FPM were boycotting the cabinet and the dialogue sessions) to elect Aoun president by throwing all the blame on Hariri.

By the 17th of September, the media was buzzing with rumors that Hariri was surprisingly going to endorse Aoun as his presidential candidate. While it wasn’t clear where the rumors originated from (an FM MP said that very same week that Aoun wasn’t an independent president and that he doesn’t represent the Christian’s public opinion), Berri panicked, and said that he preferred Frangieh over Aoun.

That strategic mistake from Berri made it clear to everyone that he was not willing to vote for Aoun after all, even if everyone stood by the former general. In fact, until that very moment, it did not make sense for Hariri to endorse Aoun since, as explained earlier, it would be unwise to make such a huge concession (presidency) without making sure that he had something “worthy” (electoral law, governmental share) in return. But now that it was obvious that Berri wasn’t willing to vote for Aoun even if Hariri endorsed him, the FM leader started one of his smartest maneuvers since November 2015: He began hinting, via visits to every politician that has ever exited (he visited Frangieh on the 26th of September, met with Gemayel on the 28th, also meeting Jumblatt that same day) that Michel Aoun was indeed an option, causing further panic in the Amal camp – especially after Hariri also met Berri that week: According to reports, Berri was willing to accept “half a package deal” involving “an agreement on the electoral law, the finance minister post, creating an oil ministry and retaking the energy ministry portfolio.”

There was no Aoun presidency in Berri’s half-package deal – at least in the press reports,  which might have made Hariri realize that he could harass Berri and sabotage the March 8 alliance by circulating the name of Aoun as next president: By the 30th of September, Aoun was meeting with Hariri (yes, that escalated quickly). Berri tried to mask his strategic political faux-pas and tried to hide his Aoun veto by saying in that week that “he has no personal dispute with any candidate”, but it was already too late, and soon enough, Berri (and Frangieh)  understood that it was useless to *hide their emotions and try to mask their opinions*: Berri publicly clashed with the patriarch, which really isn’t something he usually does, and the FPM did not surprisingly escalate when it came to October’s cabinet meetings, only partially boycotting it twice, on October 6 and October 13th, for obvious reasons: And while they were actually sending a friendly message to everyone by dropping their full cabinet boycott, Frangieh was vowing to stay in the race despite everything, as Berri’s sources still said that he would never nominate Aoun.

When rumors of Hariri endorsing Aoun become even more relevant, Berri did something he never does: He used the sectarian card, and accused the FPM and the FM of making a deal behind his back and going back to the “Sunni-Christian duality era”. In the last 5 years of Lebanese politics, speaker Berri had never, ever used the sectarian card. The aounists have been talking about the national pact too much recently (inserting the word “ميثاقية” in every speech), and Berri probably thought he could use the FPM’s weapon against them. The FPM however had the momentum both in the political arena (via Hariri’s meetings) and on the ground, via the 13 October anniversary protest. Hezbollah’s awkward (official) silence also wasn’t of much help to Berri, so the FPM, experts in using the sectarian card, smoothly stopped Berri’s “you are turning back on Shias” rants by…not escalating (best strategy ever).

But it was already too late for anything anyway. Hariri had already figured out his master plan: In fact, Berri was trying to throw all the vacancy blame on Hariri, so when Hariri was sure (probably by the end of September) that Berri wasn’t on board with the Aoun presidency even with Hariri’s approval, the former prime minister came up with his brilliant maneuver of endorsing Aoun:

While it is still unclear how Saudi-Arabia gave Hariri the green light to endorse someone as controversial to the Kingdom as Aoun, two things are very important to note here: As much as this is the first political defeat for Berri since ages, Hariri is in no way a winner right now from this endorsement. Hariri has now conceded a defeat – although he made it look like a national victory in his speech – by endorsing Hezbollah’s official candidate, and Ashraf Rifi is going to slowly take away Hariri’s electorate and continue what he started in May (no one likes the moderates and those who make deals). With no apparent electoral law in sight – although there might be one under the table, who knows – Hariri will have lost (in the vacant presidency) a key negotiating card with the FPM, and although he is probably coming as prime minister under Aoun, he’s going to have to fight for his place in the next parliamentary elections – especially as there was no agreement on a parliamentary extension. As president, Michel Aoun can directly control the formation of the cabinet, and with no agreement on that either, Hariri is going to struggle to form his government, and will have to pay the price – sooner or later – with Lebanon’s political elite but also with his electorate, for going forward with a Aoun nomination without having any guarantees – not even anything about Hezbollah’s involvement in Syria: What are they going to write in the ministerial declaration? Hariri mentioned a deal in his endorsement, but endorsing Aoun, without clarifying every microscopical detail in the deal – a la Doha agreement – would be major rookie mistake.

Perhaps Hariri was forced to take this path (he was right when he said it was a sacrifice), partially because of Amal’s stances in the summer. He might have successfully taken the speaker down with him and unified March 14 in the process while shattering the Amal-Hezbollah-FPM trio, but he weakened himself before the scheduled parliamentary elections, and has prematurely abandoned his negotiating cards.

The only real winner here is Aoun.

Well, Aoun and Geagea (Since Geagea has all his allies now on the same side).

Technically, Aoun, Geagea, and the philosophical concept of patience and waiting 3 years in order to get what you want.

Oh, and by the way, the Aoun-Hariri presidency-prime minister deal was expected 3 years ago. 3 YEARS AGO.

Let’s see what happens next. There’s a presidential election session on the 31st of October. Should be interesting.

This was the 25th post in a series of monthly posts covering the presidential elections. This post is about the second half of September, and the month of October 2016.