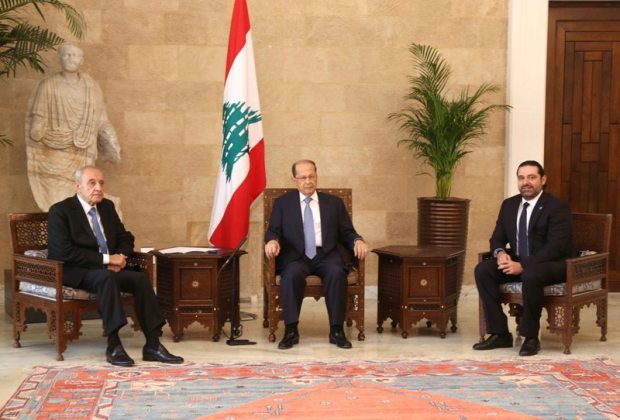 This is the 21st post in a series of monthly posts covering (forgotten/ignored) WikiLeaks cables about Lebanon.

There were many shocking political events in Lebanon  during 2016, but between Geagea’s alliance with Aoun, Hariri’s endorsement of Frangieh, Frangieh’s rivalry with Aoun, Hariri’s endorsement of Aoun and Aoun’s decision to share power with Hariri, a very important political developement went unnoticed in the mainstream media, and was probably at the center of all of the previous political maneuvers: The dynamism of the Berri and Aoun’s political ties.

Since President Aoun and Speaker Berri are now (by law) the two most important politicians of the country, and since they’re supposed to be allies (remember the March 8 alliance?), but apparently aren’t (since Berri was the only major Lebanese politician not to vote for Aoun in the 31st of October’s presidential election), this month’s WikiLeaks cable I’m sharing is a 9 year-old one about the 2007 presidential election. In the cable, speaker Berri awkwardly says that “Michel Aoun had the right to be president”, that “Aoun could not just be cut out of the negotiations”,  that “the majority of Christians are with Aoun”, that isolating Aoun “would be like leaving a cat alone in a room by itself”, that “he knows Aoun is irrational”, while also noting “his personal dislike of Aoun”, and “saying Aoun was not his ally but an ally of Hizballah”.

So yeah, this conversation kind of… sums up what awkwardly happened 9 years later… right?

I only kept the relevant parts of the cable that are about Berri and Aoun. Enjoy:

16. (C) Berri said “all Lebanese are now behind Michel Sleiman,” but Aoun had the right to be president because the strongest representative of the Shia held the Speaker’s position, the strongest of the Sunni would hold the prime minister’s seat (referring to Saad Hariri), and under this logic, Michel Aoun, the leader of the Christian party with the largest number of seats in parliament, should be President. He noted that the largest party in parliament is Saad Hariri’s Future Party, followed by Aoun’s Free Patriotic Movement, then Berri’s Amal party, then Hizballah. He added that Aoun’s party controlled 20 of the 64 seats allotted to Christians; therefore, Aoun could not just be cut out of the negotiations.

17. (C) Berri also thought that A/S Welch’s visit to Lebanon on December 15 and 16 was a “snub” to Aoun, highlighting the fact that A/S Welch is perceived to have purposely avoided a meeting with Aoun, because A/S Welch visited Lebanese Forces leader Samir Geagea, but not Aoun. In Berri’s view, the majority of Christians are with Aoun, and in the future Sleiman would be the only man able to challenge Aoun’s popularity. He noted that many Christians left Aoun’s party after he signed his pact with Hizballah, but these Christians did not cross over and join Geagea’s party, because the Christians know that Geagea is a “criminal.”

18. (C) A/S Welch stated that “Aoun is a problem,” adding maybe it is Aoun’s ambition or the support he receives from outsiders that persuades him to act as irrationally as he does. A/S Welch continued that most politicians can be reasoned with if there is a disagreement between two parties, and that a solution can ultimately be reached, but that such a scenario was impossible with Aoun. “How do you deal with Aoun?” he asked Berri. Berri said that the key was for A/S Welch to visit Aoun. Berri continued that isolating Aoun “would be like leaving a cat alone in a room by itself.” DAPNSA Abrams replied that nothing comes out of a Aoun visit. A/S Welch said that he would not meet with Aoun, but that Ambassador Feltman would upon his return. A/S Welch added that Berri was a skilled politician, and that he should leave Aoun behind.

19. (C) Berri lamented that he could not leave Aoun behind because Aoun is an ally of Hizballah, and Hizballah will only deal with March 14 through its interlocutor, Aoun. He said that March 8 decided to make Aoun its negotiator to give him the ability to take credit for a possible solution. He confided to A/S Welch that he knows Aoun is irrational. Berri also noted his personal dislike of Aoun, saying Aoun was not his ally but an ally of Hizballah. He highlighted the fact that Aoun voted against him for the speaker’s position and tried to convince other Christians in parliament to do the same (Note: Berri also revealed that Aoun admitted to him that his insistence on a two-year mandate for Sleiman was only a bargaining chip to secure other concessions. End Note.) He told A/S Welch that he reached out to Ambassador Feltman for help on dealing with Aoun and that if A/S Welch talked with Aoun, he would feel more accepted and less like an outsider.

20. (C) A/S Welch reiterated his belief that Aoun would not lead March 8 anywhere. Berri then asked A/S Welch to ask Hariri to speak to Aoun, which A/S Welch said he do. A/S BEIRUT 00001985 004 OF 004 Welch noted that if Berri really wanted to move things along, he would use his influence over Hizballah to influence Aoun, who is a “nobody” without Hizballah’s support. Berri said he held no such influence over Hizballah and that Aoun’s power comes from his own popularity amongst the Christians,

21. (C) Lastly, Berri asked A/S Welch about the Paris donors’ meeting for the Palestinian Authority (PA) and inquired whether or not France would be in contact with Syria in order to find a solution to the current political crisis. A/S Welch said that the French did not think they could succeed working with the Syrians any longer. A/S Welch added that the French were very disappointed with the results of their efforts, referring to the now dead French initiative. A/S Welch noted that French Foreign Minister Bernard Kouchner was very disappointed at the outcome and that he personally blamed Syria.