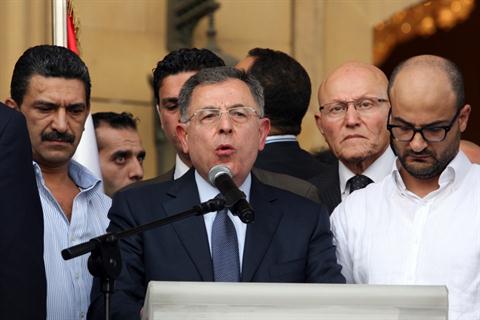 Siniora giving his speech in Wissam Al-Hassan’s funeral, Nadim Koteich is on his left.

Nadim Koteich calls the demonstrators to storm the Grand Serail.  Few minutes later, on the ground, Nouhad El Machnouk says that the protesters won’t stop  attacking the Serail until the government falls. Half an hour later, Hariri tells his supporters to withdraw from the streets. Geagea and Gemayel quickly imitate Hariri and do the same. Fifteen minutes later, Elias Atallah says that the supporters won’t leave the streets. Siniora initially stays silent then calls for calamity. The protesters confused, don’t leave but rather reorganize themselves peacefully. One day later, Mouin Al-Merehbe incite the protesters in Tripoli to start a civil disobedience. Meanwhile, his colleagues in the FM refuse to call for civil disobedience. END_OF_DOCUMENT_TOKEN_TO_BE_REPLACED 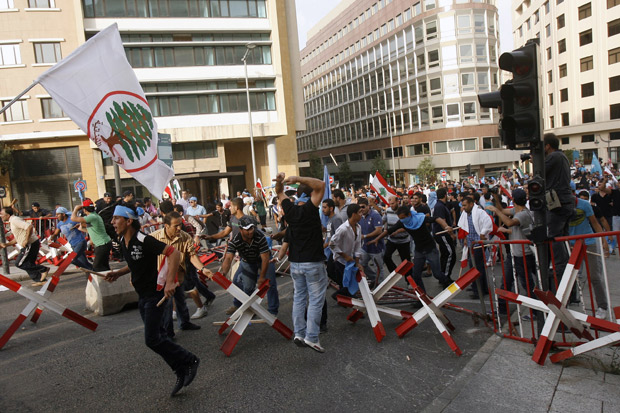 Nadim Koteich made his calls while Siniora was next to him. So why didn’t Siniora stop the crowds immediately? why didn’t he ask for them to halt their movement? Because it would have been too awkward to stop Koteich who was enthusiastically singing his words while Siniora’s speech was itself inciting and taunting against Mikati. What could be the worst result after all? Deep down, he knew that if the couple of thousands succeeded to storm the Serail, every political detail would have changed in this country. END_OF_DOCUMENT_TOKEN_TO_BE_REPLACED

It’s amazing how few seconds can change a nation. The assassination of the General happened within seconds, but its repercussions will shape Lebanon’s political future. As if time stopped and brought us back to the 14th of February 2012. Yet it’s not much of a déjà vu. 2012 is not 2005, and this time, things have deeply changed.

M14 found in the assassination the perfect timing. They wanted to bring the government down, and now they can easily take it down. The bomb is big enough to destroy the government with it. They wanted a popular boost, ” a Cedar Revolution II” and got the alibi to move. Samir Geagea wanted to take the Christian advantage over Aoun for good, and he got it. The explosion happened in the heart of Achrafieh, a Christian region, and the bombing made Geagea – quite awkwardly – the strong man. Hariri and the FM are on the rise again: Mikati seems weaker than ever, and we might be on the eve of another 14 March 2005. END_OF_DOCUMENT_TOKEN_TO_BE_REPLACED

An explosion targeting an ISF General, killing 8 Lebanese and wounding dozens brings us back to the black days.

At first, it’s a small explosion. Half an hour later, it is reported to be one of the biggest blasts Lebanon has ever saw. 4 Hours later, it  turns out that one of Lebanon’s top security officials, the head of the information branch of the ISF is the target. At first, politicians on the ground said that the bomb was destined to hit civilians and spread fear in the capital as there were no politicians targeted. Some went as far as considering it an attack against the Christians of Beirut. Pictures of Bachir started surfacing all over the Facebook profiles, so were statuses on the Hundred days war. END_OF_DOCUMENT_TOKEN_TO_BE_REPLACED