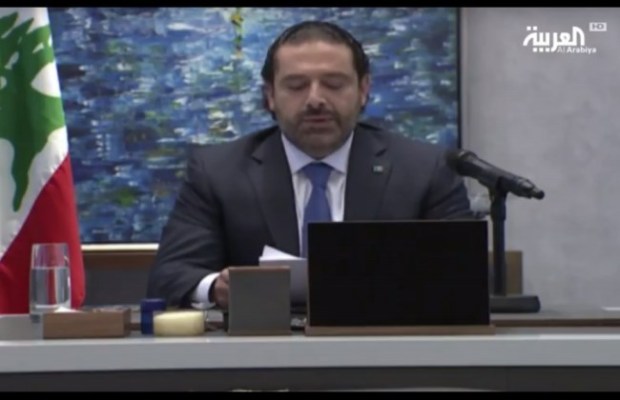 On the 11th of November 1943, French forces raided the houses of several Lebanese officials, including the President Bechara Khoury and his Prime Minister Riad Solh, three days after the Lebanese Parliament had unilaterally abolished the French mandate in Lebanon. Emile Edde was appointed as President, the parliament was dissolved, and Lebanon’s leaders were arrested and imprisoned in the Rashaya citadel. France eventually yielded to Lebanese and international pressure, and the release of the prisoners on the 22nd of November has since been celebrated as the Lebanese Independence Day.

That was the last time a foreign country so obviously pressured a Lebanese Prime Minister to resign. Enter 2017.

Exactly 74 years later, on the 4th of November 2017, Lebanon’s Prime Minister Saad Hariri unexpectedly resigned from Saudi-Arabia, ending almost a year of stability and shared rule between Lebanon’s rival parties, blaming Hezbollah and Iranian interference, and citing assassination plots against him. Contrary to popular opinion, the resignation of a Sunni Prime Minister from a Hezbollah-led coalition ahead of parliamentary elections in 2018 made perfect political sense. There was however something fishy about that entire political development: Hariri had resigned from Saudi Arabia, in a previously recorded televised speech, using an extremely violent rhetoric, unseen since at least Hariri was last ousted from power in 2011.

The textbook definition of regional pressure

Ideally, Hariri’s resignation was a Machiavellian maneuver to win next year’s elections, except it wasn’t – in fact it might have put the entire electoral process in jeopardy. It was rather a result of Saudi pressure on the Lebanese Prime Minister who also happened to also be a Saudi-Lebanese citizen with a business empire in Saudi Arabia. The fishy resignation address was enough to raise suspicion, but a regional context of Saudi-Iranian political escalation, a succession crisis in Riyadh, as well as the arrest of several Princes in Saudi Arabia that exact same day was enough to highlight the amount of (financial? non-financial?) pressure the Saudis could have exerted on the premier to resign. Even in the aftermath of the resignation, Hariri didn’t head back to Beirut to officially present his resignation and instead stayed in Saudi Arabia for two weeks, fueling rumors that he was under house arrest and was being treated like the other arrested Princes in Saudi Arabia. The confusion in Hariri’s party, the Future Movement, even raised more eyebrows, and the party’s call for their leader to return home only added more substance to the rumors. By the end of the first week of the resignation, stories started emerging on how the Lebanese Prime-Minister was immediately treated as a prisoner from the moment he landed in Saudi-Arabia.

While both Saudi-Arabia and Hariri denied that the premier was forced to resign and was under arrest, increasing Lebanese and international pressure to clarify the situation led Hariri to take part in a live interview in order to prove that he was indeed free in Saudi-Arabia, but even that interview was full of awkward and uncomfortable moments for Hariri. And when it was eventually decided that Hariri would leave Saudi-Arabia to his first destination outside the gulf – France,  it looked as if the Prime Minister was going into exile (especially that the move was preceded by a visit from the French President to Saudi Arabia). Even the New York Times speculated that Hariri’s kids remained in Saudi Arabia as a leverage on the PM.

The foreign interference in Lebanese politics was so high this month even Lebanon’s politicians weren’t really understanding what’s happening at the beginning. The Lebanese President tried to stall at first, asking Hariri to come home, then considered the Premier to be under arrest when the President’s demands that the Premier returns to Beirut were ignored. Berri, probably in denial that something was happening outside his control, refused to accept the validity of the resignation, and Nasrallah quickly tried to win the narrative while trying to calm things down , considering that Hariri was being forced to resign, turning Hariri into a victim and Saudi Arabia into a culprit, and implying there was a rift between the regional and local leaderships of the anti-Hezbollah camp. I don’t think there’s anything more humiliating to Hariri than being defended by Nasrallah as a hostage in Saudi Arabia, and soon enough, almost every pro-Hezbollah party in the country embraced Nasrallah’s political stances. By defending Hariri and refusing to escalate, March 8 parties were successfully containing the Saudi political offensive on Hezbollah, which led to even more escalation from Saudi Arabia that considered Lebanon – via Hezbollah – had declared war on it, 2 days after the resignation, soon calling all Saudi citizens to leave Lebanon. Nasrallah would later on counter those stances on the 10th of November by saying the exact opposite thing the Saudis said. As for the stances of the rest of the Lebanese politicians, they should be regarded as temporary speeches that would vanish and reappear as new developments unravel between Saudi-Arabia and Iran, stances that also have absolutely no impact whatsoever on the de-facto state of Lebanese affairs. As Hariri eventually leaves Saudi-Arabia, the take-home message is that every minute Hariri spent more in Saudi-Arabia was a disaster for the Future Movement and his allies in Beirut. Foreign interference in Lebanese politics by a regional power hasn’t been as evident since at least 2005, and as a leader of a bloc that ironically calls itself “Lebanon first”, every single part of Hariri’s trip to Saudi Arabia backfired on his party, his Lebanese allies and Saudi Arabia. In the end, Hezbollah was winning in the chaos, which was not really a win for Hezbollah since it could have been what the Saudis wanted in the first place. Or is it?

The republic of (conspiracy?) theories

In fact, according to the first theory explaining the regional motives of the resignation, Saudi Arabia was removing Hariri from power in order to force the creation of an entirely pro-Hezbollah government as part of a plan to push Israel to go to war with Hezbollah. A second theory, fueled by Hariri’s meeting with Vilayati the day before the resignation happened, is that Hariri was trying to mediate between Saudi Arabia and Iran. A more developed version of this theory (bring the popcorn), circulated on Social media, is that Hariri resigned because he tried to plot – helped by the other arrested Princes – an Iranian-backed coup against the Crown Prince of Saudi Arabia Mohamad Bin Salman, a coup that was unraveled by the Crown Prince in the hours before the resignation and the arrests. Another theory claims that Saudi-Arabia was planning to replace Saad Hariri with his brother Bahaa’, with multiple parties secretly endorsing the Prime Minister’s brother (what is this, The Godfather?). Another, more simplistic theory, is that Saudi-Arabia was simply trying to escalate things with Iran as a distraction while the Crown Prince MBS consolidates power. Or perhaps Saudi Arabia simply wanted to escalate things with Iran in Lebanon after struggling to improve its influence elsewhere.

There is a fine line between theories and conspiracy theories, and in such a context, everyone is free to draw the line wherever he wants – The most important thing remains Popcorn. As Elias Muhanna from Qifa Nabki puts it: Saad Hariri is the Schrödinger’s Cat of politicians: Until Hariri emerges from the sealed box of Saudi Arabia  (feel free to replace “sealed box” with “house arrest”, “exile” or any other “leverage” on the PM), he is simultaneously prime minister and not prime minister of Lebanon, and it will be a while till we truly know and understand what happened in the Kingdom as well as the Saudi motives for the resignation.

The Saudi-Iranian Mandate for Lebanon

The common denominator for all those theories? It’s full of Saudi Arabia and Iran (on the bright side, not a lot of Syria).

There is too much foreign interference right now by Saudi Arabia and Iran, and when a Lebanese Prime-Minister resigns under pressure from Riyadh while Iran tries to make use of that resignation, know that the “independent” Lebanese Republic in 2017 is no more independent than the Lebanese republic was under the French Mandate in the 1930s. If a miracle somehow happens and politicians agree to proceed with the 2018 elections, Lebanese voters will have a choice: Either renew their trust in the 2009 members of the Parliament, confirm the Saudi-Iranian mandate for Lebanon and turn the country into an arena for proxy wars, or finally start heading towards a sovereign independent country that answers to no one but its people.

Lebanon’s ruling political parties and politicians might try to conceal this chaotic month with future calls of dissociation policy and coalition “happy ending” governments such as the ones we had to endure for the past decade. But as long as they are militarily equipped by one country, or pressured to resign by another, there will never be a free will in Lebanese politics.

Lebanon as whole is a country that is a hostage of Saudi-Iranian politics, and as the month of November 2017 made it perfectly clear, there is only one war that matters in Lebanon, and it shouldn’t be the Saudi-Iranian one on Lebanese soil. It’s the electoral war that rids Lebanon from the influence of both countries and the turmoil they bring with them. And that war is here.