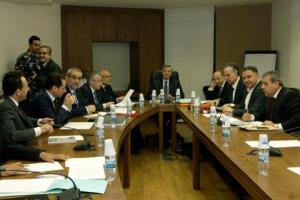 What happened in January is quite interesting. It seems that the Orthodox Gathering law is being used not only for electoral purposes, but also for political ones.

Michel Aoun’s strategy. The OG law is the perfect electoral change for him. It gives him the chance to compete on 64 seats, and to win up to 40 of them. It makes him less dependant on his Shia allies, and permits an emergence of a Sunni opposition. But it’s not the law in itself that’s only reinforcing Michel Aoun. Michel Aoun has two goals before the elections: To separate whatever is left of M14 parties, but also to make sure the Free Patriotic Movement stays more powerful than the other parties on the Christian scene. There is no doubt that the FPM was losing popularity on the Christian side for the past few years. The easiest plan for any sectarian leader to gain popularity is by pushing for sectarian plans. By asking for “Christian rights”, Michel Aoun is playing on the sectarian card.

Why it’s a win-win situation for Aoun. Michel Aoun was the first one to heavily back the OG law. The Lebanese Forces and the Phalanges, after quickly noticing his plan to attract Christian voters, made sure they go public and support the law too. However, the FPM had the aproval of Hezbollah and Amal on the law, while Hariri vetoed it. Michel Aoun probably wouldn’t make an Orange tsunami like 2005, by suggesting that he was the only one that was with the OG law and Christian rights. But he did put M14 leaders in an awkward position. Even though Geagea’s response to back the OG law was fast, Michel Aoun’s move was a success. He forced Geagea to enter in a confrontation with Hariri, managed to split M14 in their attitude towards the law and showed a “Sunni party that’s opposing Christian rights”.

If you can’t convince them, confuse them. If the OG law makes it through the parliament, Michel Aoun will say that he was the first one that asked for it. And if it doesn’t make it, Michel Aoun will say that it’s the Lebanese Forces allies that refused the law. The FPM made a trap to the other Christian parties by obliging them to ask for the law (because the FPM did), and forcing them to disagree with their allies. Confusion among M14 is higher than ever, and the smartest stand was Hezbollah and Amal’s one. They gave their green light before any Future Movement response because they already know that Future Movement will veto the law. So why bother argue with Aoun and look like anti-“Christian rights” party?

It’s really funny how the electoral campaigns are actually starting by a debate on electoral laws.