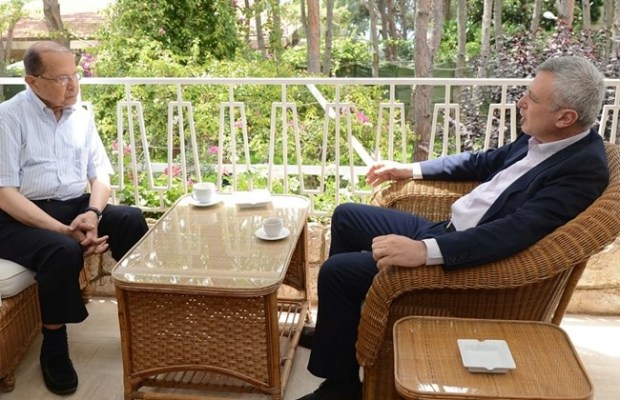 This is the 13th post in a series of monthly posts covering (forgotten/ignored) WikiLeaks cables about Lebanon.

With Geagea’s official withdrawal from the presidential race and his endorsement of Aoun, Lebanon’s presidential politics is now revolving around an awkward confrontation between two (former?) allies, Michel Aoun – supported by the FPM, the LF and Hezbollah – and Sleiman Frangieh – supported by the Marada, the FM (and Amal? ?? ???).

Since none of the two candidates can gather enough votes to win an absolute majority, and since Frangieh is refusing to withdraw for Aoun unless the FM supports Aoun, Lebanese politics are probably going back to square one: No quorum, adjourned presidential sessions, and a record-breaking vacancy.

On the bright side,  the new presidential competition between Aoun and his minor (former??) ally Frangieh is an opportunity to see how the FPM and the Marada viewed each other before this rift happened, which is why this post is a mini-compilation of the most relevant parts of three WikiLeaks cables where Marada officials talk about Aoun and FPM officials talk about Frangieh (you might also like this other WikiLeaks compilation where Aoun talks about Geagea and Geagea talks about Aoun).

“Basile said that the Free Patriotic Movement (FPM) of Michel Aoun will work with Franjieh, but the FPM does not consider this new party to be its formal ally”

So yeah, you should read the cables (Don’t forget to check their dates)

4. (C) Michel Aoun aide Gebran Basile attended the rally. He told us he was impressed by the turnout and by the positive remarks with which Franjieh opened the event. Although Franjieh was also marking the anniversary of the June 13, 1978 slaughter of his family, he avoided using the murders as a political device. Basile said that the Free Patriotic Movement (FPM) of Michel Aoun will work with Franjieh, but the FPM does not consider this new party to be its formal ally. He admitted that Franjieh, with his political background and heritage, is a strong friend of Michel Aoun. Moreover, Basile added, “he has learned a lot from us.”

7. (C) Aounists tell us that they do not consider Franjieh an ally, just a friend with common goals. When Franjieh first broached the idea of starting his own party PolChief asked him why he did not simply join Michel Aoun’s party. Franjieh balked at the idea of associating himself with another leader, even one with whom he agrees. End comment.

(Sorry if I’m pasting the whole cable, but this one is very, very important)

1. (C) Marada leader Suleiman Franjieh supports Michel Edde as president, but stresses the need to get Free Patriotic Movement leader Michel Aoun on board and to find a candidate who can safeguard Hizballah’s interests. He suggests that, if a consensus is not reached, Lebanese Armed Forces Commander Michel Sleiman should head a transitional government until new parliamentary elections are held. Franjieh dismisses the possibility of a second government or opposition-initiated violence, claiming the opposition would not oppose the Siniora government as long as it kept a low profile. End summary.

2. (C) The Ambassador, accompanied by Pol/Econ Chief and Senior FSN Political Advisor, met with Marada leader Suleiman Franjieh at his Swiss Chalet home in Bneshay on November 21. Franjieh advisors Stephan Doueihy, Raymond J. Araygi, and Richard Haykal (AmCit) also attended the one and a half hour meeting. The Ambassador opened the meeting, his first with Franjieh in over six months, stressing full U.S. support for the French initiative to find a consensus candidate. However, it appeared that March 8 was blocking progress more than March 14. The U.S. hoped to see a president before the midnight November 23 expiration of President Lahoud’s term, he said, warning there would be consequences for any party that attempted to undermine PM Siniora’s government.

IF NOT EDDE, THEN SLEIMAN

3. (C) Franjieh, commenting that the Patriarch’s list had more pro-March 14 names than pro-March 8, said the opposition would not accept a March 14 candidate or even one close to March 14. It is looking for a candidate who will reassure Hizballah, satisfy all groups in the opposition, and not pose a serious threat to the popularity of Free Patriotic Movement leader Michel Aoun. Aoun must be on board, he stressed. Otherwise, Aoun could make a deal with Hariri and leave the rest of the opposition out.

4. (C) Franjieh claimed the opposition would support a consensus candidate. Michel Edde is the only feasible consensus candidate on the Patriarch’s list, he argued, since he satisfied both Hizballah and the international community, was a friend to March 14, and did not pose a threat to Aoun. The Christians would not be happy with a weak Edde presidency, but the more Aoun was on board, the easier it would be. The opposition supported Edde’s candidacy because it views him as being equal distance from all parties, unlike Robert Ghanem, whom most of the opposition viewed as a March 14 figure. The opposition does not want to obstruct an agreement over the presidency, Franjieh claimed; if majority leader Saad Hariri refuses Edde’s candidacy, he will bear the responsibility for the failure to elect a consensus president.

5. (C) As for Aoun’s own candidacy, Franjieh said he believed Aoun was convinced he has no chance to become president, and that he would not be surprised to see Aoun move towards a consensus candidate. Franjieh was working on Aoun to accept Edde, he said, asking that we not share this information with Aoun himself, but Aoun was an “extremely difficult personality.” You’ve studied his psychology, he said; only Aoun can influence Aoun. He works on an action/reaction dynamic, and pushing him too hard on Edde could backfire. “We are more than halfway,” he said, saying we should see more flexibility from Aoun in the coming days. (Note. The following day Aoun announced an initiative whereby he would nominate a non-March 8 president and the majority would nominate a non-March 14 prime minister. March 14 promptly rejected the initiative. As of November 25, we understand that Aoun is now cooking up a new initiative. End note.)

6. (C) Franjieh recognized that the March 14 majority would determine the next prime minister, but the opposition would attempt to get the maximum out of the new cabinet and would use this a leverage in negotiations over the presidency. The next government should be a national unity government, he BEIRUT 00001857 002.2 OF 002 said, and the president will be the referee between the two camps.

7. (C) If a consensus could not be reached, Franjieh proposed a transitional solution in the form of a national unity government whose primary goal would be to amend the electoral law and hold early parliamentary elections. Lebanese Armed Forces (LAF) Commander Michel Sleiman would be a good candidate to head this transitional government.

8. (C) Franjieh said President Lahoud would not appoint a second cabinet before stepping down. He hinted that the opposition might work with the Siniora government (which, under the constitution, assumed presidential powers as of the midnight November 23 expiration of Lahoud’s mandate) as long as it keeps a low profile and avoids taking major decisions such as appointing a new LAF commander or changing the LAF’s mission statement, in which case the LAF would split.

9. (C) In response to the Ambassador’s question on the possibility of armed conflict, Franjieh said Marada, like everyone else, had the right to defend itself. However, it would be in reactive mode and would not initiate anything, though he would not rule out the possibility that the opposition might support any street demonstrations that occur in protest of low wages or other related socioeconomic issues. It depends on “them,” he said, warning that if March 14 decided to proceed with a half plus one vote, however, there would be a “big problem.” The status quo was “easier” than a half plus one president, he said. Conflict was a “last resort,” and Franjieh hoped that “they” would not push the opposition into a corner, forcing them into conflict. The opposition would then take all steps to preserve its interests, he warned, but it was not looking for riots or violence.

10. (C) Franjieh, commenting that everything is Lebanon was already focused on the Spring 2009 elections, said that the only real contests would be in the Christian areas. Franjieh denied any differences between his Marada party and Aoun’s Free Patriotic Movement, explaining that, at the end of the day, his goal was to work for his community. Because Aoun represented the majority of Lebanon’s Christians, he needed to work with him as well, since together the opposition Christians held 22 seats in parliament. (Note: Marada holds none of those seats. End note.)

14. (C) The Ambassador asked what Zghorta Christians had in common with Aoun’s ally, Hizballah, especially after Hizballah killed fellow Lebanese during the May crisis. Franjieh, claiming he opposed any use of Hizballah’s arms within the country, nevertheless justified its actions in May, arguing that its existence was threatened by the government’s attempt to close down its telecommunications network. The government was testing the waters, he explained, to see how Hizballah would react. Moreover, he claimed outrageously, someone had convinced Saad that this would provoke a short civil war that would result in international intervention that would bring the international community back on board with March 14.

15. (C) The opposition Christians, including Aoun, had tried to ally with the Sunnis in the past, he continued, but were frustrated by Saad’s efforts to impose his own Christian candidates (e.g., Ghattas Khoury). Furthermore, the Sunnis accused Marada and others of killing former PM Hariri and of being Syrians and Iranians, which ultimately pushed them toward Hizballah. Franjieh claimed he had not even met Hizballah SYG Nasrallah until one month before the 2005 elections, but noted that both sides were united in their support to create a new electoral law along the lines of the 1960 law, which was based on smaller “qada” that would benefit Marada by removing the ability of Sunni voters to decide candidates in Christian areas.