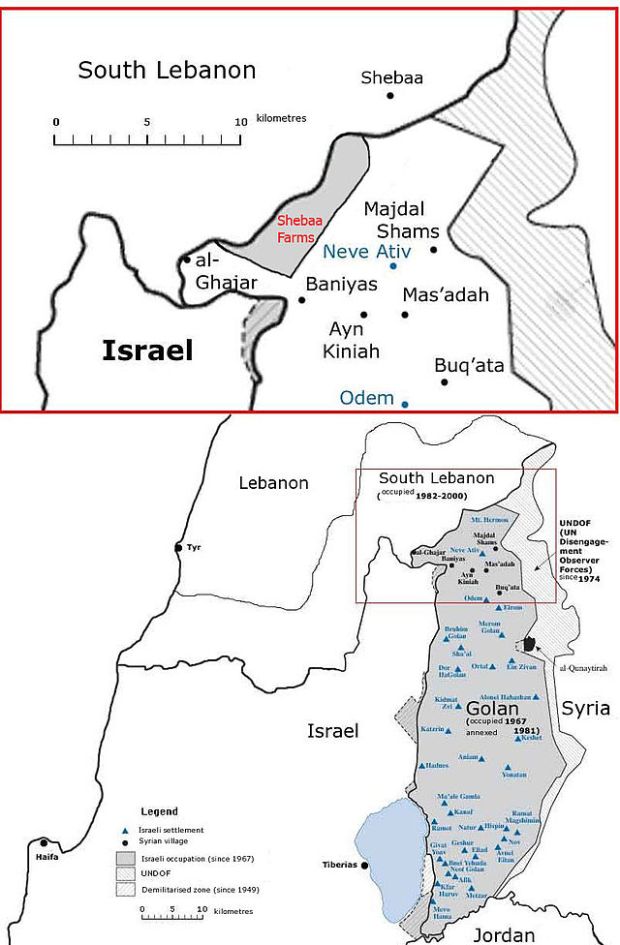 A map of the Shebaa Farms (Shukran Wikipedia)

In a very unexpected move, Hezbollah fighters attacked an Israeli military convoy in the occupied Shebaa Farms, in south Lebanon, killing two soldiers and wounding seven, in retaliation for Israel’s recent airstrike in the Golan Heights that killed Hezbollah fighters and an Iranian General.

Hezbollah needed to retaliate. For the past 3 years, the party has been constantly criticized for participating in the Syrian civil war and mainly for directing its weapons away from Israel and towards Syria. Even before Syria, Hezbollah faced a similar criticism in the wake of the May 7 events. “Hezbollah’s weapons are being used for political ends and are no longer directed at Israel”. M14 based its electoral campaign in 2009 on this discourse, and it eventually led to its victory in the 2009 parliamentary elections. M14 accused Hezbollah again of using its weapons in internal conflicts after the collapse of the Hariri government in 2011, and after Wissam Al-Hassan’s assassination in 2012. In 2011, it almost led to a fitna, and in 2012, it almost led to the downfall of the ruling M8 coalition.

Hezbollah tried to respond to this discourse by proving that it was still engaging in indirect combat with Israel, but it just wasn’t too convincing for the Lebanese public. The proof? almost no one remembers the drone that Hezbollah sent into Israel in October 2013. What everyone remembered however was Imad Mughaniyye’s assassination. Hezbollah didn’t respond to the attack properly back then, and it made them look weak. A lack of response over last week’s attacks would have made Hezbollah look even weaker (An Iranian General and Mughaniyye’s son were targeted), and it would have given the impression that Hezbollah cares more about its fight in Syria than its fight with Israel, even when Israel targets them inside Syria. Such loss of prestige would have been devastating for the party’s morale.

There’s a weird alliance going on between Middle Eastern rivals, with the United States and Hezbollah fighting together a common enemy called the Islamic State: Not long ago, the US provided actionable intelligence that probably saved lives in Dahiyeh. This indirect rapprochement was also followed by tense relations between Israel and the United States. Obama said that he will not meet with Netanyahu when the Israeli PM will come to the U.S. in March. One should not forget that for the United States, a possible deal with Iran is on the line here, and that the Israeli elections are in 45 days.  Should the Israeli army escalate, Hezbollah could drag Israel into two months of skirmishes, which wouldn’t be a perfect situation for Israel’s electoral process. No one wants to vote while Katyusha rockets are flying around the Israeli north. Even if Israel wants war, it would be a tough call in this particular timing: Hezbollah and Iran always said that “they would choose the perfect time and place” to strike back after every Israeli aggression (while M14 laughed at this sentence and accused them of cowardice). So if Hezbollah wanted to prove a point without suffering major Israeli consequences, now was the time. Such an opportunity doesn’t come twice.

… And A Perfect Location

Hezbollah chose the perfect place to strike. The attack happened in the Shebaa farms:

For the next few weeks, M14’s propaganda would be mainly directed at demonstrating how Hezbollah dragged (or tried to drag, depending on the Israeli reaction) Lebanon into another proxy war, while at the same time criticizing Hezbollah for involving Lebanon in the Syrian civil war. But that, Hezbollah should be able to handle. It is the loss of prestige and the impression that Hezbollah was abandoning the Israeli conflict for good while slowly “moving into Syria” that was killing the party politically. Now the party would gain momentum (especially if Israel’s response isn’t strong enough) and most importantly would be able to put the Syrian opposition, the Islamic State, and the Israeli Defense Forces in the same box. It would force Lebanon to rally behind Hezbollah – at least momentarily while/if Israel responds – and it will eventually make Hezbollah look like a victor which should help M8 gain the upper hand  in Lebanese politics after eight months of political vacancy and deadlock. The Lebanese cabinet’s slow response to today’s crisis (seriously, why hasn’t the cabinet met yet?) is the perfect proof that there is indeed a political void in Lebanon. A political void that M8 could easily fill should Hezbollah’s Shebaa ambush turn into a military/political victory. Of course, everything depends of Israel’s reaction, and the aftermath of today’s skirmishes, so we’ll have to wait and see.

In the meantime, the only thing we can do is to be grateful we have a wise president guiding us in these times of trouble.