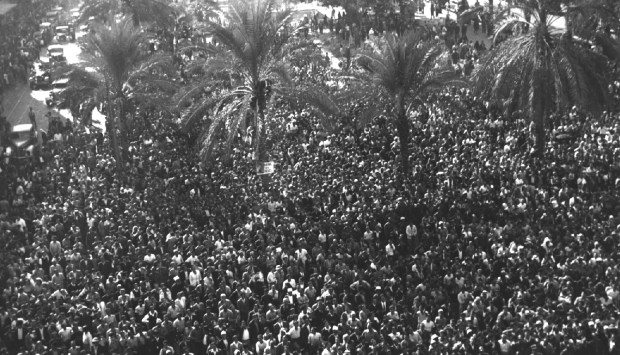 Beirut’s Martyrs’ Square during celebrations marking the release by the French of Lebanon’s government from Rashayya prison on November 22, 1943

Independent Lebanon is 71 years old today. But then again, if you think of it, we’re barely 7 years old: During the first two years we were still technically under the occupation of the French army. Then, up until 1958, no one really understood what was happening. The next seventeen years were basically buying time so that we don’t have a civil war, which we had anyway from 1975 till 1990. And then there were another fifteen years of Syrian tutelage, followed by 10 years that were more or less similar to the first fifteen ones in terms of democracy and productivity.

This post is about a Lebanese parliament that after 71 years of independence still doesn’t know how to follow the simple rules of the Constitution.

You’d think that after 14 parliamentary elections (since 1943) , we would have a parliament that actually knows how to handle a Constitution. Here’s a small compilation of the major constitutional violations that happened (or are still happening) in the past 10 years.

I – “Lebanon is a parliamentary democratic republic” (Yeah, right)

PREAMBLE
(INTRODUCED BY THE CONSTITUTIONAL LAW OF SEPTEMBER 21, 1990)
A) Lebanon is a sovereign, free, and independent country. It is a final homeland for all its citizens. It is unified in its territory, people, and institutions within the boundaries defined in this Constitution and recognized internationally.
B) Lebanon is Arab in its identity and in its affiliation. It is a founding and active member of the League of Arab States and abides by its pacts and covenants. Lebanon is also a founding and active member of the United Nations Organization and abides by its covenants and by the Universal Declaration of Human Rights. The Government shall embody these principles in all fields and areas without exception.
C) Lebanon is a parliamentary democratic republic based on respect for public liberties, especially the freedom of opinion and belief, and respect for social justice and equality of rights and duties among all citizens without discrimination.

II – “The people are the source of authority and sovereignty; they shall exercise these powers through the constitutional institutions.” (That’s why we don’t have elections anymore)

D) The people are the source of authority and sovereignty; they shall exercise these powers through the constitutional institutions.

III – “The political system is established on the principle of separation of powers, their balance and cooperation.” (That’s probably why it takes us eleven months to form a government)

E) The political system is established on the principle of separation of powers, their balance and cooperation.

F) The economic system is free and ensures private initiative and the right of private property.

G) The even development among regions on the educational, social, and economic levels shall be a basic pillar of the unity of the state and the stability of the system.

H) The abolition of political confessionalism shall be a basic national goal and shall be achieved according to a staged plan.
I) Lebanese territory is one for all Lebanese. Every Lebanese shall have the right to live in any part thereof and to enjoy the rule of law wherever he resides. There shall be no segregation of the people on the basis of any type of belonging, and no fragmentation, partition, or settlement of non-Lebanese in Lebanon.
J) There shall be no constitutional legitimacy for any authority which contradicts the ‘pact of mutual existence’.

V – I bet you didn’t even know that we’re supposed to (constitutionally) have a senate (Majlis Chuyukh). But right. Who cares.

Article 22
With the election of the first Chamber of Deputies on a national, non-confessional basis, a Senate shall be established in which all the religious communities shall be represented. Its authority shall be limited to major national issues.

Did you read the word quorum? Because I didn’t. And if the Constitution wanted to say that there was a quorum, it would have said it clearly and mentioned directly the word “quorum”. Like in this article:

[…]
5. The Council of Ministers shall meet periodically in a special seat, and the President of the republic shall chair its meetings when he attends. The legal quorum for a Council meeting shall be a two-thirds majority of its members. It shall make its decisions by consensus. […]

Even the patriarch said that there was no 2/3 quorum.

VII – How did we elect Michel Sleiman again? Because, unlike what the legend says, the Constitution was not amended in 2008.

It is also not possible to elect judges, Grade One civil servants, or their equivalents in all public institutions to the Presidency during their term or office or within two years following the date of their resignation and their effective cessation of service, or following retirement.

VIII – I don’t mean to be rude, but did “the Chamber meet automatically”? Because last time I checked, we still didn’t have a president.

Should the Presidency become vacant through the death or resignation of the President or for any other cause, the Chamber shall meet immediately and by virtue of the law to elect a successor. If either Chamber happens to be dissolved at the time the vacancy occurs, the electoral bodies shall be convened without delay and, as soon as the elections have taken place, the Chamber meets by virtue of the law.

X – “And NOT a legislative body” (In other words, the parliament shouldn’t have been allowed to vote on the extension law)

The Chamber meeting to elect the President of the Republic shall be considered an electoral body and not a legislative assembly. It must proceed immediately, without discussion of any other act, to elect the Head of the State.

XI – General Budget? What was that again?

Each year at the beginning of the October session, the Government shall submit to the Chamber of Deputies the general budget estimates of state expenditures and revenues for the following year. The budget shall voted upon article by article.

(As amended by the Constitutional Law of November 9, 1943 And by the constitutional law of September 21,1990)
The Chamber of Deputies that is elected on the basis of equality between Muslims and Christians shall take the appropriate measures to bring about the abolition of political confessionalism according to plan. A National Committee shall be formed, headed by the President of the Republic, it includes, in addition to the President of the Chamber of Deputies and the Prime Minister, leading political, intellectual, and social figures.
The tasks of this Committee shall be to study and propose the means to ensure the abolition of confessionalism, propose them to the Chamber of Deputies and to the Ministers council of ministers, and to follow up the execution of the transitional plan. During the transitional phase:
a. The sectarian groups shall be represented in a just and equitable manner in the formation of the Cabinet.
b. The principle of confessional representation in public service jobs, in the judiciary, in the military and security institutions, and in public and mixed agencies shall be cancelled in accordance with the requirements of national reconciliation; they shall be replaced by the principle of expertise and competence. However, Grade One posts and their equivalents shall be excepted from this rule, and the posts shall be distributed equally between Christians and Muslims without reserving any particular job for any sectarian group but rather applying the principles of expertise and competence.

And there are probably millions of other direct or indirect constitutional violations. They’re not as obvious as the ones here, but still, we see them almost every month.

But hey, look on the bright side: We’re so awesome and independent that we elect the president without having to rely on a Constitution.