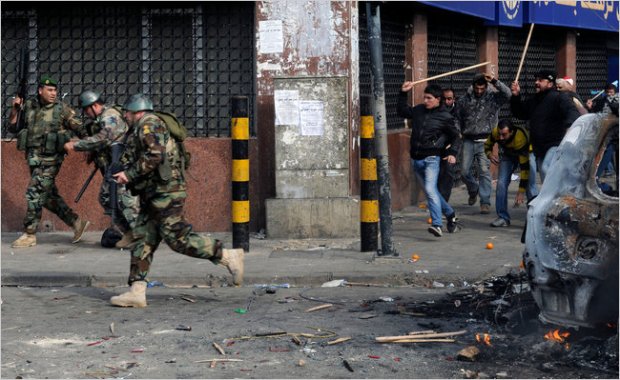 When Tammam Salam was tasked to form a government, Foreign Policy had a great article on how the same families in Lebanon get to stay in power democratically while the rule of families is being toppled everywhere else in the Arab World. The Frangiehs, the Jumblatts, the Hariris, the Gemayels are few examples. Even when you think it’s not present, you quickly realize that Gebran Bassil is Michel Aoun’s son-in-law, that Marwan Hamade is Gebran Tueni’s uncle, and that  Setrida Geagea is Samir Geagea’s wife

Though Lebanese tend to forget that quickly, political inheritance is not the only thing we have in common with the neighboring Arab countries. We also have ruling generals. True, the Arab spring was made to prevent Jamal Mubarak and Seif El Islam Gaddafi of inheriting power, but it was also  Colonel Gaddafi and General Mubarak that were the targets. In the same way the Lebanese don’t view the election of the same families to the parliament as a wrong matter, they don’t view the presence of Generals in power as a bad thing.

It is also not possible to elect judges, Grade One civil servants, or their equivalents in all public institutions to the Presidency during their term or office or within two years following the date of their resignation and their effective cessation of service, or following retirement.

Article 49 in the constitution prohibits the commander-in-chief of the army of being a president (unless he’s elected two years after he resigns) for a reason. However the constitution was amended several times in Lebanon’s history to let Grade One civil servants serve as Presidents.

The problem of amending the constitution and letting a commander-in-chief of the army be a president is that one day, like all the countries in the world, we might have a coup – as unlikely as it might sound – and the General can pressure the members of the parliament to amend the constitution and elect him, making his rule look legitimate. If the amendment hadn’t been done several times before, the move would have made him an illegitimate ruler. But now that it’s done, each time he gets criticized for being elected under a constitutional amendment, his response would be: “It was done before. Are you suggesting that Fouad Chehab and Michel Suleiman were illegitimate rulers? They were democratically elected by the parliament, under a constitutional amendment. And you’re telling me that there’s an opposition? Do I need to remind you that the Lebanese Forces did not vote for Suleiman  in 2008 and that Raymond Edde was a presidential candidate in 1958?”

But for a coup to succeed in Lebanon, with all the sectarianism and without splitting the army in two armies (or ten, or twenty), it would likely take three centuries. So the main problem of having generals in power isn’t primarily because of a possible coup, but rather because of the nature of the Lebanese system. I’ll make it clearer.

A and B are both represented in the parliament. A and B elect the president, have a say in everything else and can even veto some positions. A and B also have armed wings. On one sunny summer day, A and B clash. The army receives orders to stop the fighting between A and B. There are three possible scenarios:

2) If he stands in the middle, stops the fighting, without actually hunting the armed men down, he gets praised by A and B.

3) If he stands in the middle, stops the fighting and hunts every armed man down, he gets vetoed by A and B.

When Fouad Chehab refused to follow Camille Chamoun’s orders to fight the revolution in 1958, it was scenario 2. When Michel Suleiman did not stick to the orders of the government on banning protests on the 14th of March 2005, it was scenario 2. Emile Lahoud, Michel Aoun and Ashraf Rifi are other examples of the scenario 1 (Who needs scenario 2 when – even if for a while – there’s an A that’s stronger than B?)

That’s why generals become politicians in Lebanon. They take sides, or stand in the middle, depending on the context. But do not be fooled, for there are two types of men standing in the middle: The man who stands between A and B, and the man who stands against A and B (While following the orders of course, that are to stop A and B from fighting)

The “Amn Bel Taradi – الامن بالتراضي”, or consensual security, the fact of stopping the fighting between A and B without actually disarming A and B and punishing them for the instability they are causing, is mainly due to the fact of having officers in power. As you can see, Scenario 3 is missing,  not because it’s too good to be true, but because officers in Lebanon made it to top posts due to the scenarios 1 and 2. So why would an officer risk  his career by going for scenario 3 while he can get easily rewarded and have all the glory he wants via scenarios 1 and 2? Even when he has the political approval from everyone to go for scenario 3, Scenario 2 for an officer stays the preferred scenario, because it doesn’t get him too much problems. The battles between Jabal Mohsen and Bab El Tabbaneh are a perfect example.

When A and B know that there will not be a response from the army, it’s always an escalation of fighting that follows. Scenario 2 usually goes like that:

1) stop a fight by standing in the middle.

2) But the fighting resumes, and it’s a more brutal battle, because the fighters know there is no punishment.

3) Stand in the middle again and stop the bigger fight.

4) Repeat step 2 and 3 several times. Eventually, it’ll be too big to control and it will be more than a small local battle.

It’s not the fault of the army, and  I’m not saying the work some officers are doing in power is bad. Fouad Chehab delayed the civil war 17 years, and Michel Suleiman is probably doing the same thing. But when Generals are democratically given power, it’s for the purpose of keeping things under control. However what happens next is an instability due to the scenario 2 – الامن بالتراضي – that will eventually lead to a total loss of control.