Lebanon’s Electoral Map According To The Lebanese Forces Hybrid Law. The colored districts are the small winner-takes-all ones and the big ones within the white line are the big districts under proportional unlike in the picture.

There has been a lot of talk on a hybrid Proportional-Representation/ Winner-Takes-All electoral law in the past few weeks, and almost all the parties (PSP, Phalanges, Amal, Lebanese Forces) gave their proposals of hybrid laws in the electoral committees. The different hybrid draft laws are very similar to each other and mostly differ in the percentage of MPs elected by proportional representation (30%, 40%, 50%) but less in the constituencies’ boundaries (Small districts for the winner-takes-all seats and big ones for the PR seats). I’m going to review the draft law proposed from the Lebanese Forces. You can see the criteria of the law here.

Here’s the allocation of seats according to the law and the number of voters by sects: 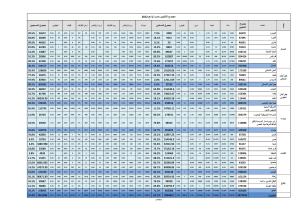 In a nutshell, the law separates Lebanon into two types of constituencies: 27 small districts (Allocated 68 seats), that are in most cases cazas, under a winner-takes-all system and 6 big districts (Allocated 60 seats), that are in most cases the mohafazats, under a PR system. The main aim of the law is to get the biggest number of Christian-elected MPs to the parliament (You can see the details in the table showing the allocation of seats). We can’t speak of clear gerrymandering here, as the electoral constituencies are in most cases the administrative districts (Cazas, Governorates) of Lebanon. However, there are some few weird things, like the separation of Hasbaya-Marjeyoun (which should give M14 a win in Hasbaya) while other joint districts like West Bekaa-Rashaya or Baalbek-Hermel aren’t separated. Two small problems that this draft law (Or any other hybrid one) might face:

The laws allocates the seats on the basis of a certain criteria that you can see here. However, a big number of the districts don’t obey to any of the criteria. For example, in Jezzine the Greek Catholics aren’t considered to be a minor sect in the district so the seat stays in the caza and doesn’t shift to the governorate. That’s only one example, and there’s a lot more. Apparently the Christian seats are taken as one block and the minor Christian sects’ seats within a Christian district with a Maronite majority don’t go to the Mohafazas and stay in the caza. The lawmakers need to clarify a few things. Also, there are other districts where the criteria is missing something or doesn’t match the district’s seat repartition. For example, why is it that the Protestant seat gets transferred from Beirut I to the Governorate and not the Armenian Catholic one?

That disproportion between the districts will be present in almost all hybrid laws, because some districts get to have more influence sometimes even though they have a smaller population. And after all, that’s how the law gives more influence to Christians. When the Akkar (66% Sunni) district should be as 7 times more influential than Bcharre (100% Christian) and is instead only 2.67 times more influential, you get to understand how the Christians, 38%, will be able to elect 56 MPs (43.75%). A big number of the small districts happen to be mainly Christian and that’s how the Lebanese Forces draft law can boost the number of the Christian-elected MPs.

PS: For Beirut the constituencies changed, so I consider edthat the votes of Ahrafieh-Rmeil-Saifi-Mdawar will go for M8 because of  the Armenian votes (29% Orthodox, 6% Catholic) that exceed the Sunni ones (9%), and that the other two districts are under a Sunni majority, making M14 win them under a winner-takes-all system. I also consider that the agreements of Doha splitting the Beirut 2 seats equally between M14 and M8 are now history. For the Governorate of Beirut (Proportional Representation), I use the same results as 2009. 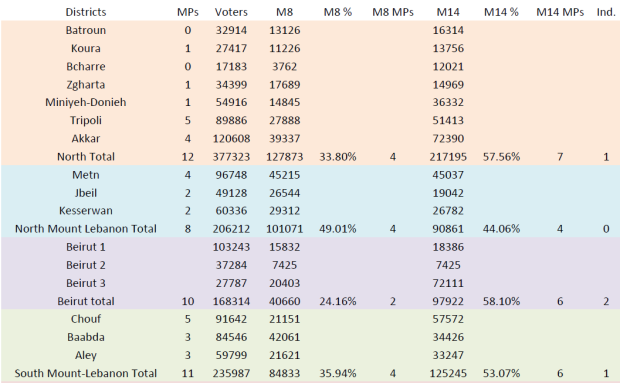 Proportional Representation In The Mohafazas And The Subsequent Seats Distribution- Part I
UPDATE: A friend kindly pointed out that I made mistakes while summing up the votes for Beirut, making the results 25.93% for M8 and 62,83% for M14, giving an extra MP for M8 and no extra one for M14.

PS: I don’t know what the minimum threshold (The minimum percentage that a list should have so that it an get one of its candidates elected) will be, so I made the assumption that it would be somewhere around 10%. That’s why you will notice the presence of independent MPs.

Too much electoral draft laws, Too Much.