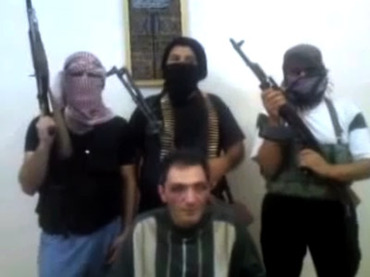 Hassan al-Mikdad in the custody of the Free Syrian Army

They weren’t human or inhuman. They were nonhuman.

That’s how Jean-Paul Kauffman quoted his co-detained in captivity Michel Seurat, who was abducted and died in captivity during the Lebanese Civil War.

It seems that  the Hostages War of the eighties resumed. But this time, the Americans and Europeans are replaced by Qataris, Turks and Syrians. This time, the abductions aren’t made to meet a political stand or to pressure for the retreat of Foreign forces. This time abductions are made to end abductions of Lebanese in Syria. “An eye for an eye, a tooth for a tooth”. These are the exact words of a relative of a Lebanese detainee while being interviewed. If you look deep in the Lebano-Syrian Crisis you can notice few interesting things.

Lebanon, hostage of the Gulf States. We were always the hostages of Syria. There were times when the Syrians would close Lebanon’s only functioning border and paralyse our whole economy for minor political greeds. We are even more dependent now. Four Arab states have urged their citizens to leave Lebanon because of signs that khaliji residents in Lebanon might be kidnapped too. This is  the bullet that will kill the exhausted touristic season in Lebanon. As if the timing of Ramadan and the Syrian crisis aren’t enough, the calls of evacuation end one of Lebanon’s last source of income.

The Cherry on the top. If a Qatari is hurt, the Lebanese in Qatar will  be expelled. Another main source of income is now subject to fade. The Lebanese abroad won’t have wages to send home anymore. That only means Less income and more unemployment.

Who to blame? The Qatari reaction is the key. Even a potential threat to one Qatari citizen led the Qatari authorities to threaten to expel the Lebanese expatriates in Qatar. It’s true. The Lebanese government maybe couldn’t have stopped the kidnapping of the 11 Lebanese, but it could have done something a bit more efficient than waiting and negotiating with nothing to offer in exchange. I would have loved to see the FSA’s reaction if the Lebanese authorities even tried to speak of evacuating all the Syrian Opposition Members from Lebanon to Syria if the detained Lebanese aren’t handed within 48 hours to the Lebanese authorities. And that’s the issue. The Lebanese government didn’t do anything practical. It made the families wait and stress for 3 months and now is making them suffer with the lack of sufficient information. Are they dead? Injured? Alive? These are crucial moments. It is true that the Mikdad’s reaction after the kidnapping of their relative was violent. But they learned from the mistakes of the families of the 11 detainees. The Lebanese authorities are slaves of foreign forces, and they can’t piss off any of the parties in the conflict without appearing that they are taking sides in it. The most efficient thing they could do was done: Flying to Turkey to negotiate.

The Government’s approval Of The Kidnappings. They didn’t say it out loud, but the army and ISF didn’t try to stop the Mikdad’s military wing and gave them a silent green light to finish their operations. The officials and president’s calls for an end of abductions are symbolic. Deep down, the government knows that anything she does will get her in official trouble or sanctions. They let other parties do the job of kidnapping whom they wish, and leave the job of negotiating to the Lebanese authorities. It’s a win-win card for both the Lebanese authorities and families. The families will have the chance to see their relatives again, while the government would free them while still having the image of a self-distancing neutral authority.

Hezbollah’s Silence. In the middle of all the buzz, the party that is the most related to the issue of the kidnapping of the Shia Lebanese in Syria didn’t  make any worthy statement ( compared to the fact that Nasrallah spoke the same day the Lebanese were kidnapped). A strategic silence, on one hand so that the Party doesn’t make any premature effort or mistake before things get clear (Are the Lebanese dead?). Hezbollah, that is influent in the government and in the Mikdad clan, is trying to keep the government alive while pleasing his supporters.

The Syrian Dilemma. Did the FSA kill the Lebanese hostages? Did the Syrian Army bomb their position and killed them by mistake? keeping the two questions open will keep the potential civil strife in Lebanon on hold. And that’s what the authorities and the media have been doing.

For the moment, at least.